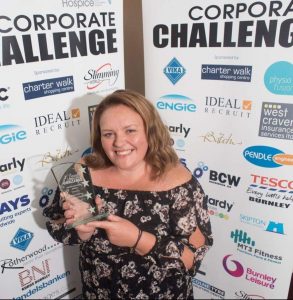 The challenge has seen 28 companies participate and raised a grand total of £96,251. The innovative concept of the Corporate Challenge saw the Hospice give companies £50 and asked them to turn it into as much as they could during a four-month period (1st June-30th September).
West Craven Insurance Services won the #PendlesideCorp Social Media Engagement Award, were nominated in the Team Spirit award and had also Best Fundraiser.

In addition, Kimberley Chapman from West Craven Insurance came runner up and was highly commended as Best Female. Kimberley was instrumental in West Cravens fundraising activities organising many of the company’s events including an incredibly successful Golf Day.
Kimberley said;  “It’s been such a great and rewarding experience and the whole of the team at West Craven have worked tremendously hard putting on the events but we also had fun on the way too. It was a great effort by so many people. There were some outstanding amounts raised, but the awards recognised everybody’s contribution – not just those who raised the most money, but also the company’s that took on board the ethos and won engagement from wider audience.”

Ian Clarkson Company Director at West Craven, said: “We’re really proud to have raised much needed funds for Pendleside Hospice and taken part in such a brilliant initiative. To have so many businesses involved not only raise much needed funds, but also engage lots of people locally and raise awareness of the vitally important work of the Hospice and the fact that they touch so many lives in a really positive way. Most of us have at some point experienced friends or family with life-limiting illnesses and it’s both humbling and inspiring to see the amazing support for people that is provided by our wonderful hospice.” 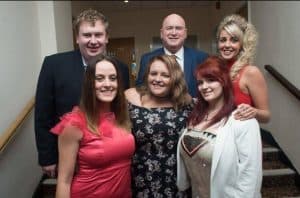 have had a number of prominent local businesses like West Craven Insurance taking part in the challenge and getting so much commitment from all their members of staff.

“As well as raising much needed funds for Pendleside Hospice, the Corporate Challenge benefits the businesses taking part though providing team-building opportunities, inter-departmental working, publicity and a contribution to the company’s Corporate and Social Responsibility efforts. They also know that they’ve made a huge contribution to the continued work the hospice does in helping people living with a life-limiting illnesses.”

Menu
We use cookies on our website. If you continue to use this site we will assume that you are happy with it.OkRead More